As I was ascending to camp 3, I passed the Chilean fellows down from their summit attempt on the "Shield".  The guy with whom I had originally spoken was rattled.  He conveyed that near the summit or a thousand feet below, there was a significant crevasse.  As his friend was belaying him, the lip broke and tons of ice and snow fell on top of him.  His friend confirmed this story as they paused in their descent back to the moraine.  The Chilean said,  "I am lucky to be alive,  I am going to have 5 beers when I get back.  I shouldn't be here."  I could tell from their faces, they had a harrowing experience near the summit.  Their "Shield" route intersected the "normal" route near the summit.  That is where this occurred.

Whilst sleeping in the beautiful star filled night prior to our move to camp four through the Candaletta, there was nothing to portend any inclement weather.  As a matter of fact, I crawled from the warmth of my tent to heed the call of nature in the frigid winter air and marveled at the most clear, star filled evening I can remember.  As I nestled back into the warmth of my cocoon (okay, Martin's sleeping bag), I zipped up and fell quickly away to sleep.  Within two hours things changed dramatically.  I awakened to the flapping of the tent.  It increased with each half hour until it felt as if the tent would dislodge with us in it.  Brian and I both awoke to make comments and look outside.  The gusts were so strong it blew snow into the tent which was working its way through the ventilation at the top.  As the night rolled into morning, the sounds of a freight train made any sleep impossible.  As daylight filtered in through the gale, Willie had crawled over to our vestibule.  We shouted over each other and realized he was telling us that this was definitely a time to "stay put".  And stay put we did.  Throughout the morning and most of the day the wind would howl and flatten parts of the tent.  Thank goodness we had securely anchored the tent with snow anchors instead of stakes.  Our camp mates didn't fare so well.  They had lost portions of their belongings/tents in the storm.  No one was moving until after lunch when we all got so stir crazy we suited up and headed outside.  The wind would literally knock you down if you stood the wrong way.  Here we all were facing the same direction with full parkas and blizzard gear, digging out tents and milling about for short periods of time.  It was kind of cold but inside the tent, the UV radiation made it quite tolerable.

Cooking was another matter.  The MSR Reactor is the ONLY stove to have in that situation.  It is impervious to wind.  Unlike the weak Jetboil systems and high maintenance Whisperlites, the Reactor cranked consistently and without fail as evidenced in the video below.

Also, I might plug another piece of gear.  The North Face Mountain 25 tent, on its virgin outing.  Aside from the Trango 3, it was the most stable on the slope as well.  That's why I bought it.  It is a big mountain tent designed for just such situations and consistently remained taught in the gusts.  It was humorous watching people attempt to urinate in the windstorm as we had created a designated spot below camp.  Since that is the only direction into which you could stand without being blown to your knees, all eyes were forced upon your backside and the waterworks emanating from your front side.  Camp humor knows no limits.  By late afternoon, the wind abated and by midnight it was mostly gone.  The front had moved on and tomorrow would be a good move day.

Tomorrow saw us pack for the last camp and the guided American group packed and descended, along with the oxygen I might need later.  It was at this point we passed the Austrian Rescue Oufit with whom we began this adventure.  The big wind had actually blown one of their tents completely off the mountain at high camp.  Their trip was over, no summit.  I felt badly for them.

This next section was the most dangerous, I knew and we needed to be sharp.  Brian and I roped up early in the morning and began our climb in earnest.  The steepness of this section is dramatic.  You begin to cross over snow bridges that span monster crevasses.  I really wanted to video or photograph things but the Roadrunner was moving too quickly on the rope and we needed to not dally in any spot for long.  After a few places where you had to jump crevasses we came to the Garganta.  It is steep pitch of about one rope length.  To ascend, you really need two ice tools.  I had one so it would have to do.  The way I maneuvered was to kick steps, swing the ice axe and pull up with it.  Brian was above me and I didn't look down too much.  Breathing here was very difficult, we were at 18000 or so.  You had to be careful but needed to move quickly.  The sun was starting to hit the snow and soften it considerably.  Soft snow is a real pain and can be dangerous.  Softness makes things want to move and fall.  I knew we had to get moving.  My lungs were not on the same game plan.

I was really struggling to breathe.  By now it was 6-7 steps and the gasping for air.  All my practice in the pool and on the track weren't worth a hill of beans right now.  I just couldn't breathe.  My alveoli were not receptive to the lack of oxygen molecules.  I could sense Brian's impatience and justifiably so.  He was moving without any difficulties and I was dead weight for him on the rope.  When we topped out on the Garganta, I sat down, very frustrated.  I took the only break of the climb that day aside from the multiple "lean- over- the- ice-- axe- breaks". My legs were good, my head was good, no signs of Acute Mountain Sickness, just my doggoned lungs.  Of course my stomach was still a mess but all that ugliness had abated days ago.  At altitude, you sort of feel nauseous most of the time, so this was nothing out of the ordinary. 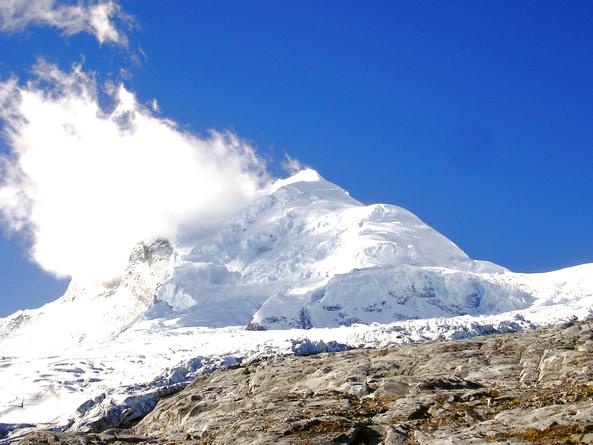 It was simply amazing my difficulties breathing.  After the rest, I saddled up and moved on.  Most of the elevation gain was over it was time to circle around towards the Col for our camp.  I enjoyed this part of the climb as it traversed and looped around towards Huascaran North imparting views of the interior mountains previously unafforded.  Any relief from the straight uphill stuff was a blessing.  We moved for another hour until the col came into view.  It was a stunning looking place but still very distant and very high.  To my chagrin, we had to drop down and then make a 250 foot ascent before gaining the camp.  I knew it would be hell and it was.  Those final steps to the sliver of real estate known as camp 4 was some of the most trying in my mountaineering career.  When I topped out on the Col, the first sight was our tent already set up by Willie and Carlos.  What a welcomed sight.  I took very little pause, long enough to lose the crampons, drop my harness and pack and dive into that tent, totally spent.  I lay there for about 45 minutes as Brian bustled about as usual.  He was barking orders about lunch and water etc but I tuned him out.  It was time to let my lungs have a break.  His young lungs didn't need the rest apparently, or so I thought.  As the day progressed he battled a serious headache and we both were suffering from altitudinal malaise. 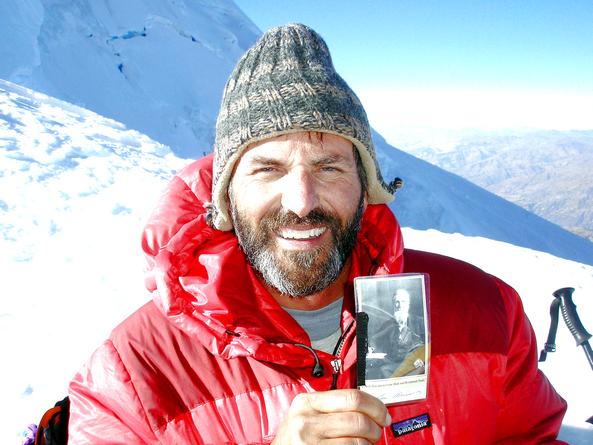 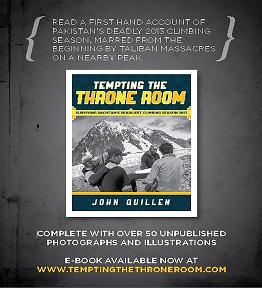